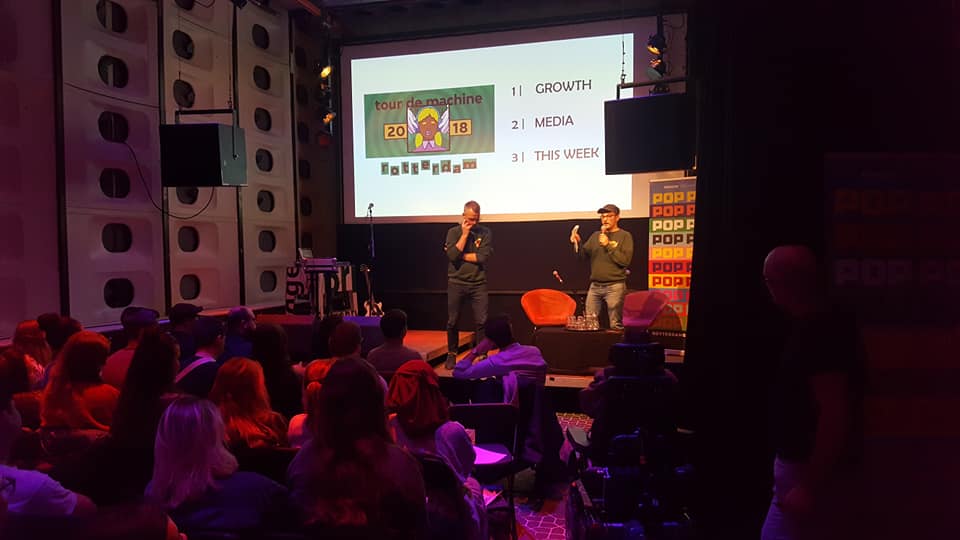 On Friday November 2nd Rotterdam welcomed Atze de Vrieze and Niels Aalberts from the VPRO 3voor12 Podcast De Machine for an afternoon about the Dutch music industry. Together with other colleagues of the Erasmus University, the Rotterdam University of Applied Sciences and Codarts, the POPLIVE team organized one leg of their college tour for students interested in the backstage machinery of the world of pop music, which resulted in a fruitful conversation about an incredible wide range topics: from the Maassilo to Armoo and from the long tail economy to the rise of K-Pop. Read here a blog about this event.

In the podcast Atze de Vrieze and Niels Aalberts discuss every two weeks the latest developments in the music industry. For the Tour de Machine they turned their podcasts into an interactive lecture, where students could throw a paper plane whenever they had a question, creating a jukebox with impromptu lectures on various music industry topics. The session began with short introduction from Pauwke, Martijn and Arno from the POPLIVE team which included a brief history of music in Rotterdam (and Rotterdam Terror Corps in particular) and ended with a beautiful performance from singer-songwriter BÄSN.

Atze and Niels started with sharing their views on the music scene in Rotterdam. In Rotterdam the mid-level venues have been absent for a while now, and even though this might have contributed to the development of a lively underground scene, mid-level venues are important for artists for their growth towards becoming a sustainable act. Bands start out in bars and small venues, but need these larger venues to build an audience and in order to obtain more substantial fees from which they can make a living. The Maassilo can be a nice opportunity for this, and in addition might bring a level of artists to Rotterdam that otherwise would have opted for similar venues in Amsterdam or Utrecht.

Another recurring theme was the way how artists, producers and other actors in the current music landscape can make a living in music. Here, Atze and Niels touched upon several interesting ideas. First of all, the relevance of marketing, or at least a remarkable story, has become very important to stand out in the crowd. Great examples here are Pip Blom, who at the age of fifteen started a blog about her dream to play at Glastonbury one day, and vlogger and hip hopp artist Armoo who builds his career on the basis of being a hated artist.

Secondly, the session also touched upon the topic of gender equality. On a question from a student from the audience on how she should cope with a work environment that was not inclusive to women. Atze admitted that he once was ‘that guy’, arguing: “But we did not get any applications from women.” He has come to realize that in order to attract female talent, he has to actively look for diversity, outside male-dominated networks.

Lastly,  Atze and Niels discussed the effects of the internet on the position of artists. Even in the age of the internet, it remains a challenge to make a living in the long tail of the music industry. Nevertheless, new opportunities have opened up. If you manage to get your music at Spotify playlists, which could be considered as a new gatekeeper in the industry, people might not now your name, but listen to you anyway as part of a coffeehouse playlist. This can result in millions of streams per month and, in addition, a decent income. One more example are Dutch producers who, because of the worldwide connectivity the internet has to offer, can sell songs to the Korean music industry, who are looking abroad for influences for their K-Pop music. All in all, it was a versatile session and hopefully was inspiring for the attending students.