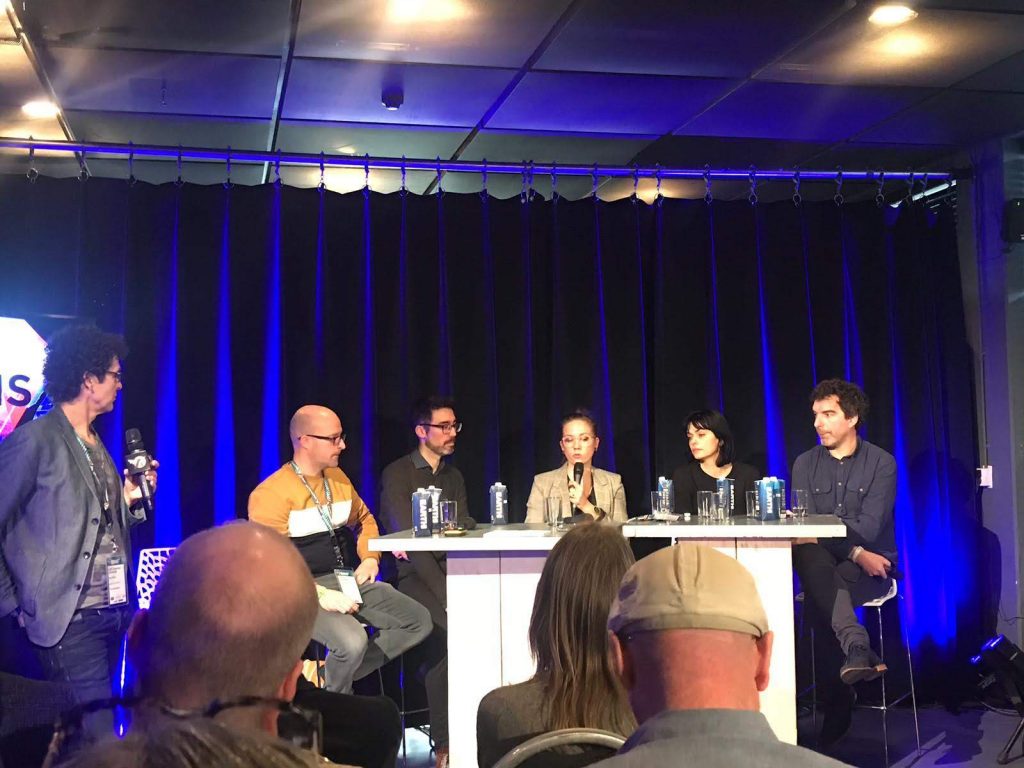 POPLIVE at the Eurosonic Conference 2019

What are the consequences of the superstar economy on the live music industry? On Friday January 15th the POPLIVE team hosted a panel on this topic at the conference of Eurosonic Noorderslag. Moderated by Erik Hitters and with a presentation of Martijn Mulder, the panel talked about the lessons from scientific research for the music sector. Read here a blog about the event.

Even though science and pop culture might have had difficulties understanding each other in the past, in this session the aim was to bridge the gap between the two fields. Questions were addressed such as: how do you survive as a pop artists? Can you still take risks when you book artists for your venue? Can we use data to predict ticket sales? A panel with representatives from the industry, including artist Aafke Romeijn, pop venue director Minke Weeda and festival director Johan Gijsen, reflected on the presented scientific insights.

Overall, the POPLIVE team was well-represented during the Eurosonic conference. Earlier on that Friday, before the POPLIVE panel, Pauwke Berkers took part in a panel on gender inequality in pop music “Pushing for change from within: how we move forward for gender equality in the music industry”. In the panel Jess Partridge (Keychange), Silvina Munich (CISAC), Sine Tofte Hannibal (Danish Composers Society) and Natalia Vergara (Señoritas on Fire) discussed together with Aafke Romeijn which initiatives help to create a more balanced representation in pop music. Pauwke opened the panel with some relevant information on the basis of his research with Eefje Smeulders and BUMA/STEMRA on the underrepresentation of women in music.

Afterwards, our POPLIVE session started with a column by art economist Pim van Klink who enthusiastically argued against the negative attitude towards scientific insights that sometimes exist in the music industry. Afterwards, Erik Hitters introduced the POPLIVE project, and talked about the current state of knowledge on the recent trends in the music industry. The most important developments are the digital transformations of the past twenty years that have fundamentally altered the existing business model. The position of artists have become more precarious, artists depend more on live performances and a superstar economy is developing where the bigger artists profit, but the long tail has difficulties to survive. With these trends as the backdrop, the session then proceeded with two pitches of researchers Martijn Mulder (Rotterdam University of Applied Sciences, NL) and Jonas Kiesekoms (PXL-Music University Hasselt, BE) who shared their scientific insights with the audience.

First up was Martijn Mulder, who presented his preliminary results of the first part of the POPLIVE project that he just wrapped up. Recently he interviewed 14 directors of venues and festivals in cities throughout the Netherlands, to learn about the current issues that they see themselves confronted with. Main concern of the participants is that the sector has to make sure that, given the problems in the long tail, the industry invests enough in the new generation of artists. The growing competition for headliner acts of festivals and the rise of fees for bigger artists pushes smaller artists out of the market, and makes organizing festivals a riskier enterprise. Question here is how festivals and venues can free resources to invest in new artists and can cope with these increasing risks.

Afterwards Jonas Kiesekoms introduced his project. He is developing software that can predict the ticket sales of acts, which can help programmers to assess risks when booking acts. By knowing the commercial potential of acts, programmers can book more commercial acts that might compensate revenues for upcoming artists that programmers want to invest in but might not sell enough tickets to be profitable. The project was received enthusiastically, but also with caution by the panel, who remarked that programmers often already can predict quite well how many tickets will be sold and that programmers don’t have a lot of influence over who gets booked and who not, because this often relies on the availability of artists. Nevertheless, the panel remarked that for artists this system might be interesting to predict better in which areas acts might be able to attract audiences and sell tickets.

Thereafter, the panel members discussed to which extend the superstar economy influences their everyday experiences. The responses were mixed: Minke Weeda (Rotown) argued that if you want to book artists that don’t sell well and you think that that is your task as a venue, you can always find resources for this. On the other hand Johan Gijsen (Le Guess Who?) argued that the transition towards a winner-takes-all model has been happening for years, and the programming of venues and festivals is dominated by agents. As a consequence, venues need to think about ways to tackle the issue of talent development. By starting festivals within your venue, you can develop new talented acts on a small scale, who afterwards can sell tickets on their own.

All in all the panel proved to be a fruitful (and too short) discussion of the superstar economy and showed not only that the topic is highly relevant but also that the problematic side effects it has, are widely shared in the sector. It is important to keep the conversation about the sustainability of the long tail in pop music going, and hopefully insights from scientific research such as the POPLIVE project can make a contribute to this debate.