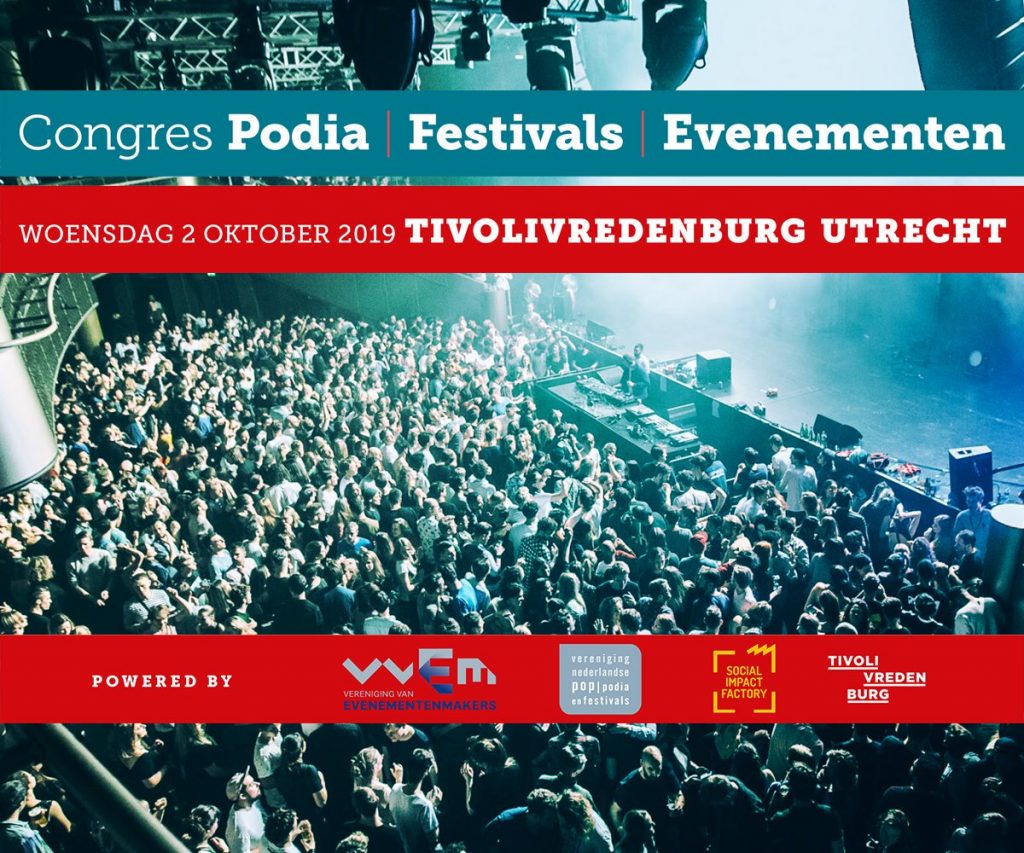 The impressive music venue TivoliVredenburg in Utrecht (NL) was the location for the Dutch national conference on music venues, festivals and events on October 2, 2019. POPLIVE participated in three panels during the conference that was organised by our project partner, the Dutch association of music venues and festivals (VNPF). This blogpost presents our contributions to panels on nightclubbing, risk and trust in live music, and urban pop music policy.

At the annual conference for Dutch professionals in music venues, festivals and events, more than 800 participants could choose from almost 70 panels and presentations. POPLIVE was invited to share some valuable research insights in several panels. More information about the conference in general can be found here (in Dutch).

POPLIVE researcher Arno van der Hoeven participated in a panel on the value of the nightlife economy. Other participants in this session were Merlijn Poolman (night mayor Groningen) and Pieter de Kroon (director Chicago Social Club, Overleg Amsterdamse Clubs). At the start of the session, each panelist described his view on the value of clubbing. Based on research he conducted together with Erik Hitters, Arno distinguished social value (i.e. social capital, public engagement and identity), cultural value (i.e. musical creativity, cultural vibrancy and talent development), economic value (e.g. tourism) and spatial value (e.g. urban development). Next, Arno presented a range of challenges for clubs and music venues. He focused on three main categories of challenges: the planning and policy context (e.g. regulatory pressure, noise issues and gentrification), economic challenges (e.g. the competitive entertainment landscape and rising operating costs) and audience trends (e.g. issues of inclusion and accessibility, and changing audience demographics and tastes).

Particularly the regulatory pressure on clubs was recognised by the other two panelists. In the discussion it became clear that a major challenge for the nightlife economy is to ensure that city  officials, regulators and policy makers understand and acknowledge the positive impact of the nightlife economy on cities. Due to the various challenges discussed above, many clubs are struggling to continue their work. This might ultimately result in less attractive cities, as clubs and music venues face closures because of gentrification. Night mayors can play an important role in lobbying for more favourable regulation that supports the social and cultural value of the nightlife economy. Furthermore, it was underscored in the panel that the various departments in local governments need to work more closely together, as the issues that were discussed involve diverse dimensions such as urban planning, cultural policy and security.

Risk and Trust in Live Music

In this session Erik Hitters and Martijn Mulder presented their research project on risk in live music. For an audience that predominantly existed of people who work in the live music industry, the POPLIVE researchers set out the idea of risk and trust in this industry. A study on the cultural industry in Manchester proved already in the year 2000 that this industry is much more susceptible to risk than other sectors or industries. In a recent study on Dutch music venues and festivals, Mulder and Hitters found confirmation for this statement. Directors of these venues and festivals increasingly experience a high degree of uncertainty and risk. These risks appear both internal and external and have an enormous impact on the daily business operations of these companies. In the presentation the researchers also emphasized that despite this vulnerability the music industry to a large extent still relies on what is called active or informal trust. This means that (very) informal networks, emotions, gut feelings and friendships play an important role in doing business in live music.

After the presentation of this research there was a short discussion with the audience. Several professionals pointed out that they recognize the high level of risk in which they operate but also feel that it’s just part of this business. Others emphasized that they are worried about the increasing uncertainties in live music, predominantly caused by policy and regulation on the one hand and globalization of the music industry on the other hand.

In the spring of 2019, the city of Rotterdam launched a new pop music policy; a good reason to organise a panel on this topic at the live music conference. Before the pop music officer of the city took the floor to explain more about the Rotterdam case, POPLIVE researcher Martijn Mulder was asked to present the context of pop music policy making in Dutch cities. Martijn argued that pop music policy seems to be at a turning point, as a result of recent developments in the music industry, in cities and in consumer behavior. As a result of these developments policy making seems to become increasingly complex. After this short presentation the directors of music venues in both Rotterdam and Nijmegen reflected on Martijn’s statement, emphasizing that music policy does seem to become more complex but that the venues themselves do not experience this complexity in their daily operations. Thereafter Kim Versluijs, pop music officer of Rotterdam, explained how the second Dutch city deals with the challenges that were put forward by Martijn. She showed how the cities music scene is based on a strong network of collaborating stakeholders and explained how this system functions even though the city lacks an iconic large live music venue. The concluding discussion with the audience focused on this last issue: how important is the traditional chain of several size venues for pop music cities nowadays?

The policy report on the Rotterdam’s pop music can be found here (in Dutch).